Thanks to everyone who has come out to run this week! I know the end of the year is so busy. Monday is a Bank Holiday so we’ll meet at Barclays for a bit later start at 8:30.

Wednesday – Canary Wharf, The Wall or the Queen’s Procession?

We have three options for our Wednesday run. First, for the dedicated distance runners, we have our last run for the year to Canary Wharf. Second, if you’re not up for that long of a run, you can run to The Wall or choose another route of your choice. Third, Wednesday is the State Opening of Parliament, which begins with the Queen’s procession from Buckingham Palace to Westminster escorted by the Household Cavalry. We have a group meeting at Barclays at 9:45am to run down to the Palace to watch the procession. We’ll follow our standard “Big Ben” route until we find a good place to watch. The procession begins around 11:00 but we should plan to be in place around 10:30., she arrives at the Houses of Parliament at 11:15 so there’ll be a bit of waiting around and dealing with the crowds, but the group that went last year were able to see the Queen and the royal family as well. A London adventure!  Here is a link to the route for the procession – http://changing-guard.com/ceremonial/state-opening-parliament.html

Our last few runs of the year…

Our second Bank Holiday of May means another lie-in—anyone running today, show up at 8:30 [and enjoy that extra 15 minutes of snooze time].  This is a DIY run, so group up and pick your favorite route—Hyde Park, Notting Hill or one of your design.

The route starts out as the Wall.  Run along Prince Albert Road to join the canal at Charlbert Street.  Run along the canal for approximately 3 miles until the canal pathway ends at the famous “Wall.”

We need to run through the Angel neighbourhood until we can re-enter the canal path.   At the wall follow the ramp up to Muriel Street.  (This is a good place to wait for your pace group.)  Take a right and then an almost immediate left up a path that winds between the apartment buildings.  See the picture below for the entrance to the path. 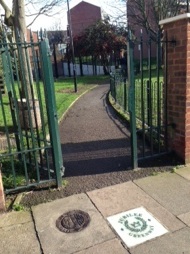 Keep going straight on the path and it will become Maygood Street.  When you get to the intersection of a main road (Barnsbury Road) turn right.  Run until you make the second left onto Chapel Market.  (There is a metal archway saying Chapel Market and a zebra crossing at the intersection.)  Follow Chapel Market until the end.  (NB:  There is a public Ladies Room at the end of White Conduit Street, which intersects with Chapel Market at the euphorium bakery.)  Turn right at Liverpool Street to the major road Upper Street.  Cross Upper Street and turn left.  (NB:  Angel Tube Station is to your right if you are going home from here.)  Make your first right at Duncan Street (Jack Wills shop at the corner) and follow until the end.  The entrance to the canal path will be directly in front of you.  Go straight along the canal (NOT a sharp right turn.)

We run for about 4 miles following the canal path to the Limehouse Basin.  We exit the canal path at the wire looking bridge – see picture below – and take the brown brick steps up to the left. 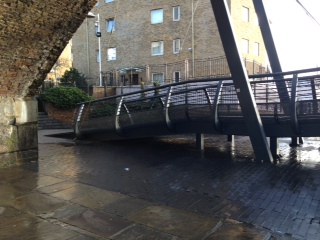 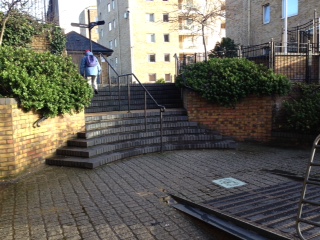 At the top of the brick steps, go straight.  At the Limehouse Gallery and Bronze Age shop turn right.  Run along the water until you reach the second metal foot-bridge leading to a park.  Cross the bridge and run through the park.  Ideally after the park, you’ll run straight, under an arch and the water will be on your right.  But last year this way was closed.  If still closed, follow this detour.  When you reach the road (Narrow St.), turn left and run past the Dunbar Wharf and make your first right on Three Colt Street.  Run until you hit the water again and turn left.  Run with the water on your right until you see the long flight of steps next to Royal China – see picture below.  You’re almost there!  Only a third of a mile remaining! 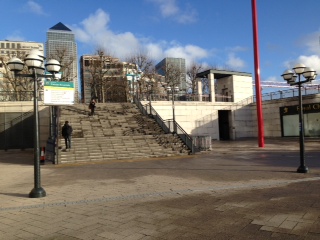 Run up the steps and straight ahead, through the small park to India Drive and then veer slightly right along Cabot Square.  You’re heading for the big sky-scrapper building in front of you.  Stop when you see the sign for the Canary Wharf DLR Station at the ‘mall’ entrance on the South Colonnade.  We’ll meet at the Starbucks inside the building on the right, next to the DLR station.  After a much earned coffee, we’ll head to the Canary Wharf Tube station [Jubilee Line] and tube it home to SJW.  Congratulations!

Run South on Finchley/Wellington Road to the SJW Church Roundabout, follow the sidewalk to the left and cross Prince Albert Road at the crosswalk just beyond the SJW Church.  Continue east and enter the canal at the Charlbert entrance.  Run east [left], cutting through the Camden Lock Market until you run out of canal path at Islington.  Touch the canal boat tunnel wall—this is The Wall!—then turn around and re-trace your steps back to SJW.  When you come off the canal at Regents Park, take Charlbert to Allitsen to SJW High Street to Starbucks.

Big Ben 4 miles:
Remember we’ll meet at 9:45 at Barclays to head down to Westminster to see the Queen’s procession.  We’ll follow the regular Big Ben route until we find a good place to watch. 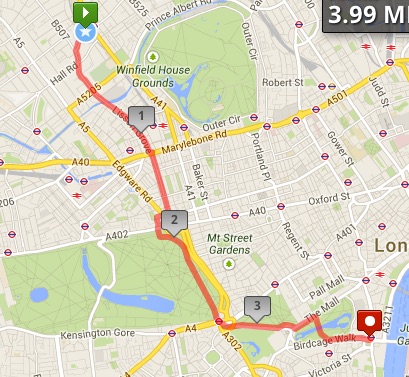 It’s “Friday Fitzjohn’s”.  You can pick your distance and whatever you choose, there will certainly be someone else interested in running that distance.  All of these routes are on the website.

4 miles:  Run up to the Hampstead tube station and back.

Click here for maps of all of the Heath routes

Time for some food shopping at Borough Market! 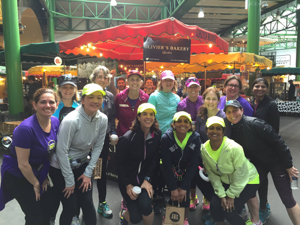