We’ve just returned from a fabulous weekend in Dorking.  The race was a huge success – our “team” did so well.  We had several personal best times which is truly an accomplishment considering the difficulty of the course.  The hills were major and they are just getting bigger and bigger as we retell our stories of the race!  I know I may embarrass some girls or overlook others, but a few of the highlights were Lynne Hodge coming in third in her age group running a 7:30 pace (and coming home with a trophy!), Stephanie completing with a sub-9:00/mile pace, Randi rocking Dorking with a 1:51, Sue and Syma finishing at sub-10:00/mile pace and Pam burning up her first race of such a long distance.  As I said, we all had a great race, everyone did extremely well – I could brag about each of our runners and I will if you give me any sort of chance to do so!
As for running this week, we’ll stick to the regular schedule.  Each day meeting at 8:15 at Starbucks.  Monday we’ll do something around 8 miles (route to be determined – I’ll come up with a few ideas and we can decide in the morning), Tuesday will be 6-7 miles at a medium pace to some interesting destination (bring your Oyster cards), Wednesday I’m heading out of town for a couple of weeks but I know people are planning on running, Thursday the Ease Back into Running group will be out there, and Friday could be the heath or we could talk Leanne into leading the group on her super-cool, Pergola/West Hampstead route.
I’m guessing we have one more week (after this one) of “regular” running before people start scattering for the summer.  I’ll still be out of town, but could I throw out a few ideas?  Many of you have said you would love one more Canary Wharf run before the summer and some of the runners moving this summer are very interested in doing a “Sights of London Farewell Run”.  Any volunteers to organize that route/run????
I might not get to see some of you before you leave for the summer.  Please let me know if you need advice/suggestions/training programs for the summer months. I’ll be in Italy for a couple of weeks and will have time to put something together for you, so just let me know.  It’s not a problem at all – I love doing it, so call or email me.  We have quite a few people running in London over the summer so keep plugged into that group to not miss out.  We will probably start doing the more regularly scheduled routine the week of 22 August as people are returning to the UK.  The week of 29 August is definitely a go.  The beginner group will start that week on Thursday, 1 September.  I’m back to London on 11 August and will be putting in some serious mileage – let me know if you’re in town…. I would love some company for those runs.
That’s it for now.  Again, a huge congratulations to all of our Dorking runners.  Well done!
Hope to see you out running,
Paula 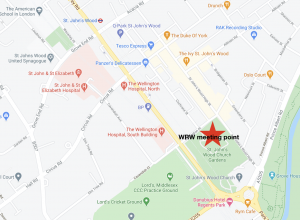