It’s been another rough weather week in London, but we managed to sneak in our runs before the afternoon rain.  That’s some good incentive to get out and run at 8:15 because you never know what the rest of the day will bring.  Monday was an especially good day because we had a fantastic turn-out for the 9-mile Embankment loop.  For a few runners, that was the first time they had ever run 9 miles – well done!

This week we have the famous 9-mile run to Canary Wharf.  It looks like most of the group has migrated to doing the long run on Monday.  This is an important training run because most of the run is non-stop along the canal.  Remember to watch your pace – don’t be tempted to go too fast.  There are two tricky sections when we’re off the canal but I’ve added detailed description below and pictures so all the groups should feel comfortable doing the route.  Plus, there are great bragging rights that come from telling your family and friends that you just ran to Canary Wharf!  (For those of you who know the route well, please note that I simplified the route in Angel.  Make sure to take a look at that section.)

On Wednesday, we’re going to try a new type of tempo workout – Fartleks!  Make sure you read the description below.

Keep up the good work everyone! and keep running!

(The route starts out as the The Wall route – if you need a shorter run consider running to the Wall and returning which is a 6-mile route.)

A few of you have said that you hate running down Wellington Road, so lets run past Panzers and turn right down Cochrane Street to the High Street and cross Prince Albert Road at the SJW zebra crossing.  Run along Prince Albert Road to join the canal at Charlbert Street.  Run along the canal for approximately 3 miles until the canal pathway ends at the famous “Wall.”

We need to run through the Angel neighbourhood until we can re-enter the canal path.   At the wall follow the ramp up to Muriel Street.  (This is a good place to wait for your pace group.)  Take a right and then an almost immediate left up a path that winds between the apartment buildings.  See the picture below for the entrance to the path.

Keep going straight on the path and it will become Maygood Street.  When you get to the intersection of a main road (Barnsbury Road) turn right.  Run until you make the second left onto Chapel Market.  (There is a metal archway saying Chapel Market and a zebra crossing at the intersection.)  Follow Chapel Market until the end.  (NB:  There is a public Ladies Room at the end of White Conduit Street, which intersects with Chapel Market at the euphorium bakery.)  Turn right at Liverpool Street to the major road Upper Street.  Cross Upper Street and turn left.  (NB:  Angel Tube Station is to your right if you are going home from here.)  Make your first right at Duncan Street (Jack Wills shop at the corner) and follow until the end.  The entrance to the canal path will be directly in front of you.  Go straight along the canal (NOT a sharp right turn.)

We run for about 4 miles following the canal path to the Limehouse Basin.  We exit the canal path at the wire looking bridge – see picture below – and take the brown brick steps up to the left.

At the top of the brick steps, go straight.  At the Limehouse Gallery and Bronze Age shop turn right.  Run along the water until you reach the second metal foot-bridge leading to a park.  Cross the bridge and run through the park.  (You’ll see that the way we have gone in the past is blocked so we need to make a slight detour.)  When you reach the road (Narrow St.), turn left and run past the Dunbar Wharf and make your first right on Three Colt Street.  Run until you hit the water again and turn left.  Run with the water on your right until you see the long flight of steps next to Royal China – see picture below.  You’re almost there!  Only a third of a mile remaining!

Run up the steps and straight ahead, through the small park to India Drive and then veer slightly right along Cabot Square.  You’re heading for the big sky-scrapper building in front of you.  Stop when you see the sign for the Canary Wharf DLR Station at the ‘mall’ entrance on the South Collanade.  We’ll meet at the Starbucks inside the building on the right, next to the DLR station.  After a much earned coffee, we’ll head to the Canary Wharf Tube station [Jubilee Line] and tube it home to SJW.  Congratulations!

Time for more tempo training—this week we incorporate Fartleks, which are short sprint bursts interspersed into the run.

Head down to the Regents Park Outer Circle the normal way [down Wellington, left at roundabout, cross zebra before the High Street, enter outer park at Charlbert] but do not go into the park, instead turn left on the outer circle and run slowly to the track.  Run ONE lap at the track, gradually increasing your speed.  Now, time to really run!

Do a timed one mile on the track [4 laps in the middle lane is pretty close] or you can set your watch to give you a one mile interval. Run this mile at about 80-85% of your maximum capacity.  If it were a scale of 1-20 [where 20 is a level of intensity that you could do for 1-2 seconds before you collapse], your timed mile should be a 16-17 [yikes!].  After your timed mile, jog another lap, slowly, around the track to recover, then continue to run slowly over the Regents Park.

Now, we’ll do about a 15-20 minute group Fartlek session.  This is how it works:  break into groups of 3-5 runners based on your sprint pace—the fastest group needs to be in front.  Separate each group by a couple of minutes before you start running again.  Someone in each group identifies the ‘run-to’ point [a bench, a rubbish can, a particular tree, etc] then counts down 3,2,1, ‘GO!’  Everyone in that group runs as hard as possible to the established ‘run-to’ point.  The distance of each fartlek should be different—mix up longer legs [maybe 200 meters] with shorter legs [maybe 20 meters].  You can do the loop outlined in the map below or just pick your own path until you’ve done about 15-20 minutes of fartleks.

Now, jog back over to the track and do ANOTHER timed mile to try to meet or better the time you had from your first timed mile.

Run, walk or crawl back to Starbucks and enjoy a much-earned coffee and chat!

Here’s an interesting tidbit—supposedly you can take a timed mile trial number and multiply by 14 to get a predicted half-marathon time.  We’ll test that theory out at the end of March! 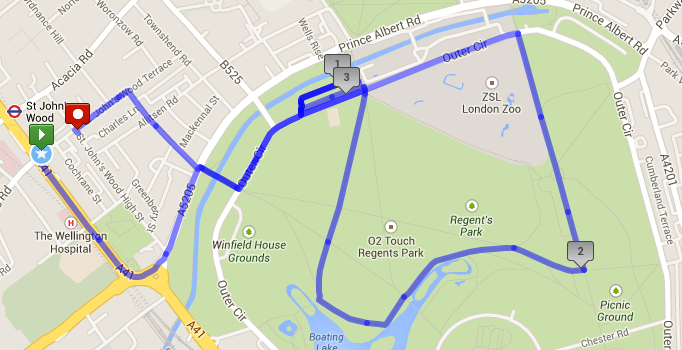 It’s time to LOVE the Heath!

You can pick your distance and whatever you choose, there will certainly be someone else interested in running that distance.  All of these routes are on the website.

In addition, every week there are a group of women who prefer to do a flat run.  We can help make sure that you find each other.

4 miles:  A great way to ease into running the hill.   Run up to the Hampstead tube station and back.

Click here for maps of all of the Heath routes 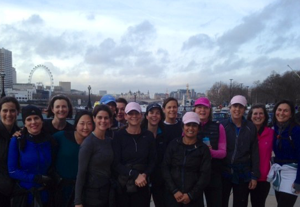