Let’s go shopping!!!  On Monday, all roads lead to Runners Need in Holborn.  We normally run with Oyster cards and a bit of cash but on Monday, you may want to throw in a credit card as well.  I’ve just spoken with the manager and they are ready for us.  Almost all of their “winter stock” has arrived (rain jackets, running jackets, long sleeve shirts, etc).  The staff at Runners Need can be very helpful in analyzing your gait and helping to steer you to the correct shoes.  If you’ve been meaning to do that but haven’t got around to it, now is your chance!

New info on the Bratislava weekend!!!  The contract with the Sheraton Hotel is finalised.  For those ladies who had a look at the initial proposal, thank you so much for your input.  We have been offered the following rates:

These rates include breakfast and all taxes except for a €1.65 per person per night city tax.  What a deal!  I’ve heard that the airline prices are quickly increasing.  Hopefully the very reasonable hotel prices will offset that expense.

Below is the proposed mileage for each program for next week: 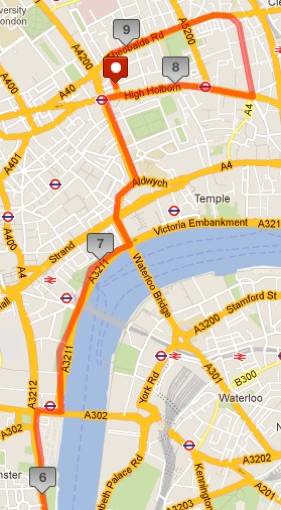 and down Sloane Sq as though we are doing the Battersea Loop.  At the river, we’ll run east along the embankment to Lancaster Place where we’ll head north to the Holborn area on Kingsway.  We turn right on High Holborn and pass the Runners Need store to carry on to do a one mile loop.

Runners Need Holborn (8 miles) – we’ll head down through Hyde Park and down Sloane Sq as though we are doing the Battersea Loop.  At the river, we’ll run east along the embankment to Lancaster Place where we’ll head north to the Holborn area on Kingsway (same as group doing 9 miles).  We turn right on High Holborn and finish at Runners Need (10 minutes ahead of the ladies above – there’s one reason to run 8 miles instead of 9 this week!!!).

Runners Need Holborn (7 miles) – this group should start with the basic route to Big Ben but keep on running!  You will pass the Westminster tube station and at the river turn left (or east) to follow the embankment to Lancaster Place (Waterloo Bridge).  Turn left and run up to Aldgate then follow Kingsway north (as seen in the map for the 8 and 9 mile routes).  At High Holborn turn right and Runners Need is on your left.  The store sits above an Evans Cycle shop.

3 Parks, Trafalgar & Regents Park (9 miles) – Join the group down to the river via Sloane Square.  When they turn to follow the embankment, you go over the river and do the Battersea loop.  Finish at the Baker Street tube station instead of running back to SJW.

3 Parks (8 miles) – if you need 8 miles but don’t want to go to Runners Need, either do the full loop of Hyde Park or run the Battersea loop route but finish around Marble Arch.

2 Parks (7 miles) – run with the group to Hyde Park then carry on to Green Park.  Instead of following the group into St James Park, do the full perimeter of Green Park (running up the steep hill towards the Ritz then running back to Wellington Arch), then head back to SJW via Baker Street.

For anyone following the gradual progression program and needing a 4 mile run, consider joining the 7 mile group until Westminster and taking the tube home from there.

Westminster/Big Ben (4 miles) – down to Hyde Park, then through Green Park to cross over into St. James Park in front of Buckingham Palace.  Run along Birdcage Walk towards Big Ben.  Finish at Westminster tube station.

If you want a tempo run, I would recommend:

The canal west (any distance) – head down to the canal in Little Venice.  Run half the distance you want and turn around and head home.

or a mixed tempo and street run:

Notting Hill (6.5 miles) – If you don’t know what you want, consider doing Notting Hill and using the canal for tempo work.  Once you turn off the canal, take it easy and enjoy the street run back to SJW.

If you don’t want a tempo run, come to the Finsbury bakery with me!

Finsbury Greenbelt to the Bakery (7 miles) – as many of our runners will not be running Friday, I think we should run up the hill on Wednesday.  This is a beautiful route up to Hampstead, then up to Highgate, then across the Finsbury greenbelt, through Finsbury Park and finishing at a bakery.  It’s not as hard as the run in the heath and there’s a bakery at the finish!  Who can complain about that????

On Friday, there are no classes at ASL so many of our runners will be home with children.  I’m happy to run the heath or do something a bit more fun like run to Borough Market.  If we went to the market, we would leave around 9:45am to get there for the market opening.  If you are planning on running Friday, let me know what you want to do.

The Heath – old route (8 miles) – we’ll do the old route this time.  You can shorten this route by heading towards the track after Parliament Hill, exit the heath, run past Royal Free Hospital then home through Belsize.

The Darcy route (6 miles) – there still is no consensus on exactly what this route is!  I did hear that some of the ladies who normally do the Betsy route may want to go for 6 miles next week.  So ask around if you’re interested in this distance.

The Betsy route (5 miles) – we have a lot of ladies doing this route each week.  If you’re interested in 5 miles, then ask around for others doing the Betsy route.  It’s a perfect combination of hills, heath and street running.

I hope to see you running this week,

P.S.  Despite all of these runners holding their chocolate medals up for the photo, Erin Roth won the free coffee last week by somewhat identifying the sculptures we found along the canal. We still don’t know who did them, but Erin found some information online about this type of artwork that sort of “pops up” along the canal. Here are links to more information about the “tiny people” of Hackney Wick.