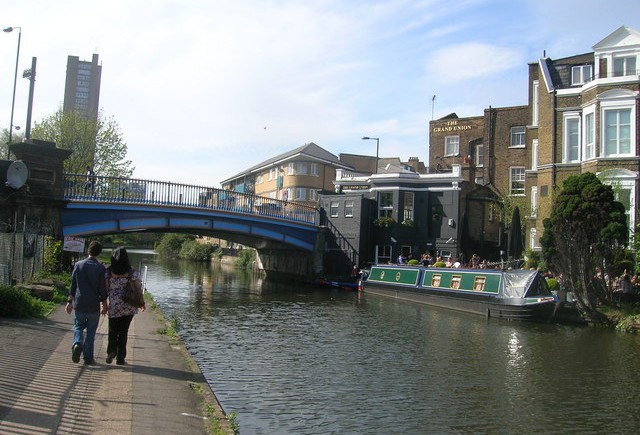 We have a love/hate relationship with the Regents Canal.  It offers long stretches with no traffic lights, which is great for race training.  On the other hand, it offers long stretches with no traffic lights, which equals no breaks.  You also have the issue of bikers and pedestrians all fighting for the slim sidewalk space.  We have had a couple of instances where our runners had an unexpected swim, so keep to the side away from the canal whenever possible.  And it is helpful to yell “BIKE” as a warning to those behind you.  But remember that all of us – bikers, runners and walkers – have a right to the canal so we should always be respectful.

The routes in the section all start on the Canal heading west towards Maida Vale:

Start out heading west on Circus Road, turn left on Grove End to St John’s Wood Road and go west, turning left on Cunningham then right on Aberdeen to work your way to Blomfield Rd.  Instead of entering the canal on Blomfield, we will run along the street sidewalk and cross the Westbourne Terrace Road bridge (this route change avoids the spot just before the bridge, where we’ve had several women fall).  Turn right after the bridge, follow the sidewalk along Delamere Terrace, and join the canal path heading west at this point.

Notting Hill (6.75 miles)
Run out the canal to the west and exit at Ladbroke Grove going straight from the canal exit.  Run to Elgin Crescent and make a left. Cross Portobello Road and continue on what is now Colville Terrace until it meets Ledbury Road where we turn right and then left at Westbourne Grove. Run down Westbourne Grove to the top of Bishop’s Bridge, then left down the steps into Sheldon Square (across from the Paddington Station entrance). Stay along the canal to where you entered, then run back on Blomfield to SJW and Starbucks.

Kensal Rise (6 miles)
Enter the canal heading west and run to the Ladbroke Grove exit.  Here we turn right and run over the bridge along Chamberlayne Road to Harvist Road. Turn right on Harvist, which turns into Brondesbury Road, and take that to Kilburn High Road/Maida Vale.  Turn right and follow Maida Vale to Hall Road where you turn left and run back to Starbucks. If you want to shorten this route, run west on the canal and turn back at your desired half-way point.

(The two mile mark is at the point on the canal when the Westway highway is over our heads.)

Wembley (8 – 9 miles)
This is a great run – we go out the Canal to the west almost the entire way. No lights and soft on the knees! Continue out the canal and exit at Alperton.  (See photo below).  Turn right at the top of the stairs and your first right again onto Ealing Road.  Just after the turn you’ll see the Alperton station (Piccadilly Line) on your left for the 7-mile route. Follow Ealing Road to the High Road and turn right.  You’ll see Wembley Central (Bakerloo Line) on your right for the 8-mile route.  For 9 miles, continue until you make a left on Park Lane which becomes Wembley Park Drive. Continue past the stadium and to the Wembley Park Tube Station (Jubilee Line).

Photo of the bridge just before the exit:

Here’s a photo of the exit off of the canal: 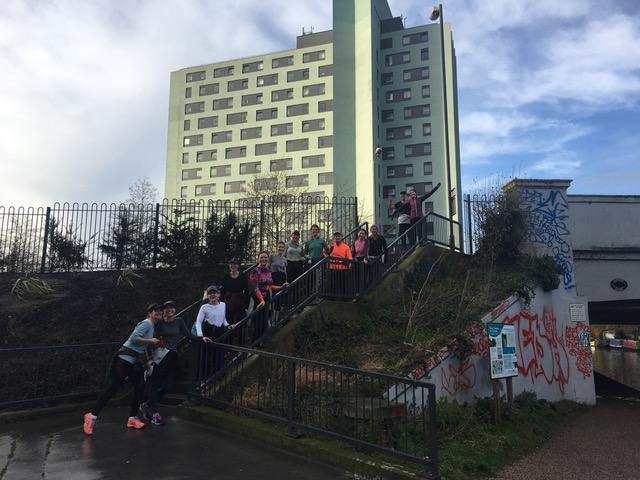 Reverse Wembley (8 miles)
We’re going to do the 8-mile Wembley route but in reverse. That means we’re going to take the tube first, out to Wembley Central station and then run back to St. John’s Wood. The benefits are that we’ll avoid the cold trip home after running, we may also have less bike traffic on the canal and we can still meet for coffee in St. John’s Wood.  We’re going to do a short run (0.75 mile, see the map below) over to the Maida Vale station and then take the Bakerloo line to Wembley Central Station. (We’re going the opposite direction to the commuter traffic so we’re hoping that the trains won’t be too crowded at that time of day.) You may want to stretch again on the train. If you’re not sure if you want to tackle 8 miles, it’s 6.5 miles to the canal exit in Little Venice so you could easily walk to town/home from there. 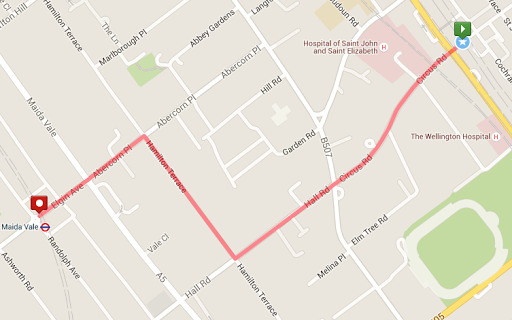 Part 2 – Wembley Central station to St. John’s Wood
Out of the station, turn left on the High Street and then take your first left on to Ealing Road. Follow Ealing Road (past the Alperton station) to the T- junction and turn left. You’ll cross over the canal bridge and see the entrance to the canal path on your left (see photo below.) We’ll follow the canal back home and then exit the canal off Bloomfield Road in Maida Vale and run back the usual way to Starbucks.

Here’s a photo of the entrance/exit on to the canal.

Greenford (9.75 miles)
We start out the regular way to get on the canal path at Maida Vale heading west. We’ll then run along the canal for about 8 more miles until we exit the canal at Oldfield Lane which is the next exit after Greenford Road.  We’re looking for the following bridge which is pretty plain but does have a small black “15” in the center. 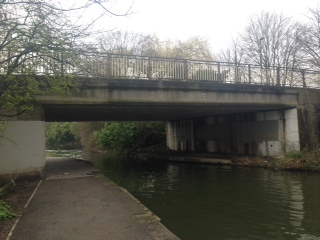 Just underneath the bridge there are steps leading up to The Black Horse Pub. 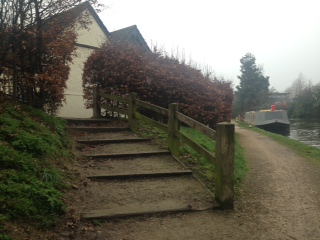 At the top of the steps turn right and run along Oldfield Lane which is fairly industrial area until you reach the Greenford Station on the right just under the railway bridge.  Tube home via the Central Line.  If you want to stop for coffee, food or the bathroom, there is a little place with the great name of the Friendly Cafe just past the station on the left.  (If you want fancy coffee, turn left at the railway bridge (instead of going under) and following the road until the next intersection where there is a mall with a Costa Coffee.)  Note, there is no guarantee these coffee places are still there!