We are trying something new this year – a self-run group for women who can run a little, or have run in the past, and are interested in a slow ramp-up in mileage and speed.  This group is for you if you:

The group will begin on Monday 10 September and will follow a modified beginner schedule starting with intervals of 4 minutes of slow running and 2 minutes of walking.  The goal is to get to 60 minutes of running (about 4 – 5 miles) by mid-December.  At that point, you will be ready to join the regular MWF group and either train for the spring half marathon or just run whatever distance of your choice.

The group will not be coached.  There will be a group What’sApp that will allow members to communicate about meeting up.  The expectation is the group will run twice a week to start.  The schedule and weekly routes are below and members are expected to know the schedule and general route (or agree on members who will be responsible for that each week).  An app called IntervalTimer is very good for keeping track of the intervals.

To join, email wrwlondon@gmail.com and tell us your What’sApp phone number and you will be connected to the group.

Note that for easing back into running, it is part of the plan to walk the first and last 5 minutes of the route so you get a little bit of a warm up.  Make sure to bring an Oyster card or contactless payment for weeks when you aren’t looping back to SJW.

Run the intervals in Regent’s Park trying your best to estimate where you will end up so you are coming out of the park and back toward the High Street as you finish.

Run down St John’s Wood Terrace past Starbucks.  Take a right on Charlbert then a left on Allitsen, then go all the way into Primrose (it becomes St Edmund’s Terrace).  Run across Primrose and down Regent’s Park Road.  Go over the bridge and take the first right down the hill to Chalk Farm Rd.  Go right on Chalk Farm, which becomes Camden High Street, and take a right on Parkway, just after the Camden tube station.  Take Parkway across Prince Albert to the Outer Circle (Parkway becomes Gloucester Gate).  Follow the Outer Circle to the right and exit at Charlbert.  Head left on Prince Albert to St John’s Wood High Street

Head down Wellington Road curving around to the left just past the church gardens and crossing at the zebra crossing.  Turn right and run along the park and turn left the mosque to enter the park.  Run along the outer circle most of the way around the park.  At the first entrance after the zoo, head into the park following the center path (see map).  This gives a little extra mileage.   At the second intersection, turn right and head out of the park onto Charlbert.  Turn left at St. John’s Wood Terrace to get back to Starbucks. 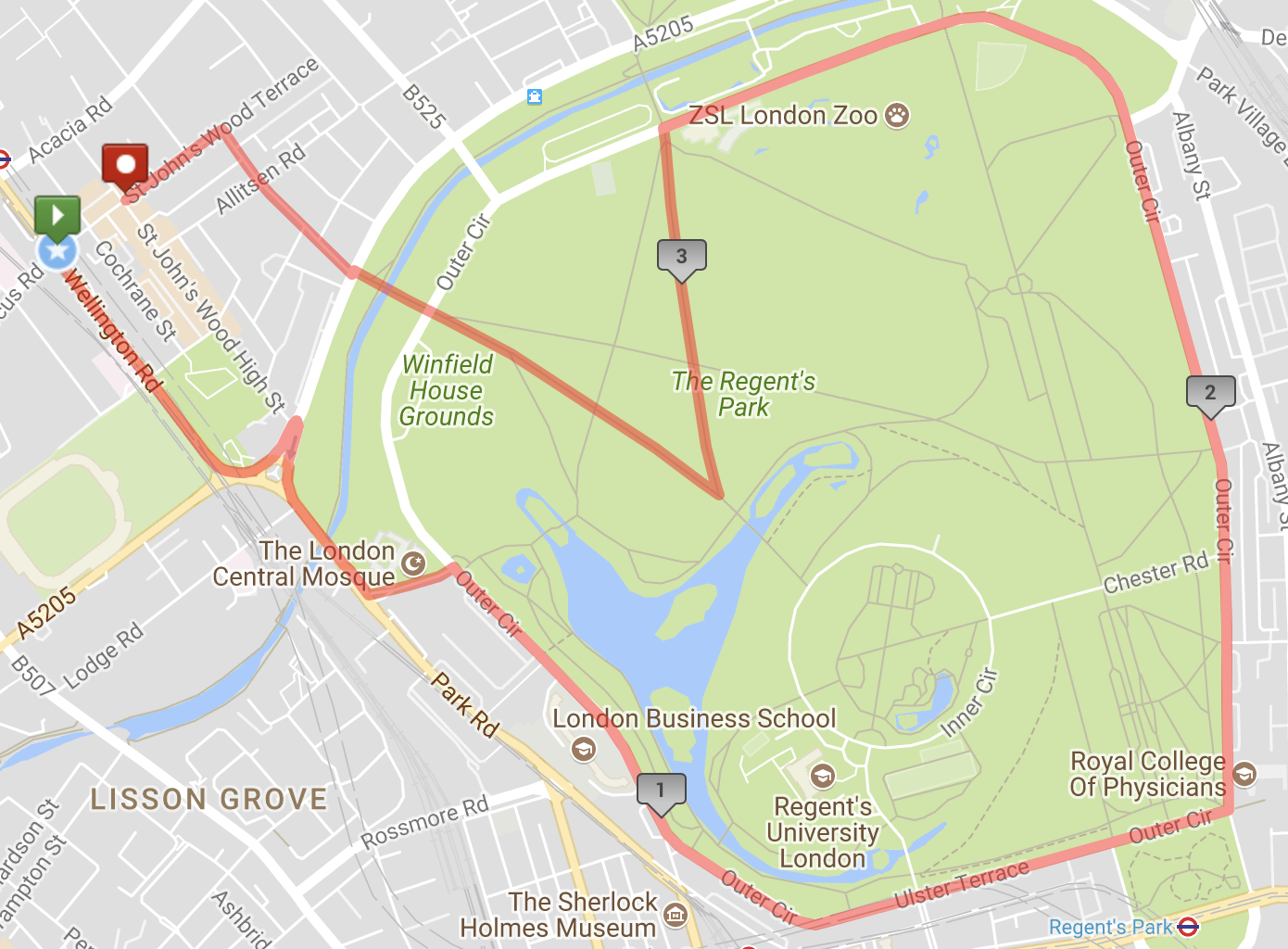 Start heading west on Circus Road and turn left on Grove End and follow south as it becomes Lisson Grove. Cross over Marylebone Road and continue on Seymour Place until the end. Turn right and cross over Edgware Road and then left to enter Hyde Park at the intersection with Stanhope Place.   Run along the eastern edge of the park to Hyde Park Corner, under Wellington Arch and down Constitution Hill. Run along the edge of Green Park, past the Victoria Memorial and cross The Mall at the traffic light. Run down The Mall and enter St. James Park.  Run over the bridge across the lake and out of the park, turning left onto Birdcage Walk and down into Parliament Square to Big Ben. Take the tube back to SJW. 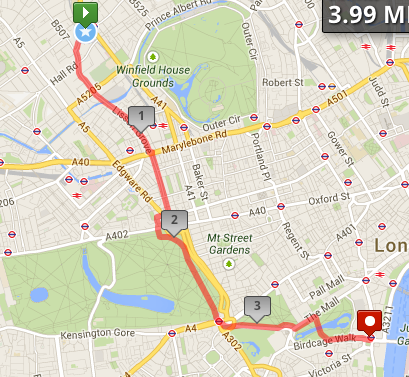 Start down St John’s Wood Terrace to Charlbert and then down to the canal entrance at Regent’s Park.  Run east on the canal towards Camden Market where we exit the canal over the bridge and turn right onto Camden High Street.  We’ll run down Camden High Street to Mornington Crescent Tube Station and veer right onto Hampstead Road, which we will take down to Robert Street.  Turn right on Robert for a few blocks and then a left on Albany Street and then the first right onto Chester Gate.  Run on the Outer Circle of Regents Park until you get to the exit for Charlbert Street.  Take Charlbert back up to St John’s Wood Terrace and then to Starbucks.

Head to Regent’s Park via Charlbert. Cross the Outer Circle, enter Regent’s, and stay right, running past the first bridge and then crossing the second one. Take a left on the Inner Circle and continue until York Bridge. Go left onto York Bridge and head out of the park, crossing Marylebone Road. Go left on Marylebone then right on Marylebone High Street which becomes Thayer. Take a right on Hinde Street and a right on Manchester Square. Run past the Wallace Collection and left on George Street to Seymour Place. Go right on Seymour Place, cross Marylebone Road, and take Lisson Grove/Grove End back to Circus. Take a right on Circus to end at Barclays. 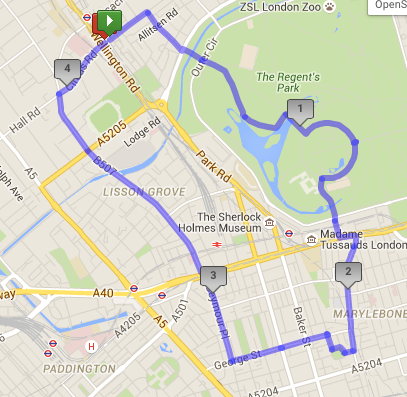 From Barclays, head down Circus Rd and turn left on Lisson Grove.  Run to Marylebone Road and cross over to Seymour Place.  At the end, turn right, cross over Edgware Road (be careful at this light) and run straight for one block on Seymour Road.  Turn left on Stanhope Place and then cross Hyde Park Pl to get into Hyde Park.  When you see the silver globe, after crossing North Carriage Dr, turn right.  Follow that path to the road (N Carriage Drive) and cross the road (be careful!).  Run down the hill to the Italian Gardens and turn left to run along the gardens (the gardens will be on your left).  Keep to the path closest to the water and run through the tunnel under the road and past the Diana Memorial Fountain and the cafe.  Keep along the water and at the end, bear right to run down onto the path (keep out of the bike path on the right).  At the end of the path, go right to make your way out of the gates to Hyde Park Corner and cross over Knightsbridge to run through the Wellington Arch and into Green Park.  Run straight and then turn left to go towards the tube station at the far end.

The route:  Run down to Hyde Park via Lisson Grove/Seymour entering the park near Speaker’s Corner. The group will exit Hyde Park at Brook St. and run across to Regent St. The route turns north to run up to Regents Park then back to Starbucks.

This may be the week of the traditional WRW Holiday Lights run.  If so, the group is encouraged to come out with the regular MWF group for it.  The route is about 4 miles if you end at Bond Street (option to make it 5 by going to Baker Street) and there is lots of stopping along the way to take in the lights and take photos. 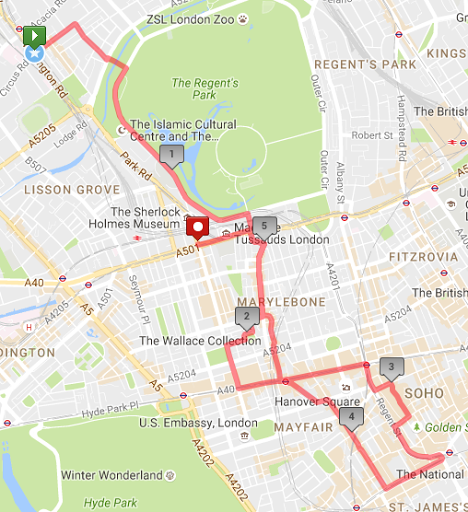