Well – that was fun!  Big Ben (or I guess we should call it the scaffolding tower that was Big Ben) is done and dusted.  That run was a huge milestone and you all did it with smiles on your faces.  Remember when you said you couldn’t imagine running all the way there?  On top of that, we had a pretty big jump up in running time – we went from 28 to 36 total minutes and from 5 to 7 minute segments.  Great job!  Hopefully you can repeat the run on Tuesday for those of you who missed it on Thursday.  If you do, take a photo and send it!

I think my favorite comment I heard after the run was, “Where are we going next??”  Don’t worry – we have lots of fun destinations planned in the coming months 🙂
This week is parent/teacher conferences at ASL.  Most of the coaches can run at the regular time so I’m hoping many of you will be able to join us.  If not, see who else is around either in the afternoon or on Friday morning to get together.
This week, the running segments are not too different from last week – just a few more 7 minute ones.  We will loop back to Barclays to get you back home to kids quickly if you need to.  I believe it’s Iro’s last week before she starts work so hopefully some can stay for coffee after to wish her well.
Some of you have asked about running a bit on the weekends.  It would be good to start that in a week or so.  In general, you don’t want to run a longer segment on the weekend than we are doing during the week – so if you ran next weekend, it shouldn’t have segments longer than 7 minutes.  The run should be no more than 30-35 total minutes including walk time.  Pay attention to your pace, too, so you don’t go too fast.  Your muscles have been building so you can add that third run, but we don’t want you to push too much and get injured.  As we run longer segments, it will become more important to have that extra run on the weekend so the longer runs during the week aren’t so tiring.
Here is the route for the week:
Cross Wellington and head down Circus Road.  Go left on Grove End to St. John’s Wood Road. Take a right on Grove End then a left on Cunningham Place.  Go right on Aberdeen Place and follow the road to the canal entrance on Blomfield.  Go west on the canal and exit at Harrow Rd.  Cross the canal on Harrow then go right on Sutherland to Castellain.  Take a left and run to Paddington Rec, entering at the Moorhead Road Gate.  Run through Paddington exiting at Carlton Vale.  Go right on Carlton Vale, right on Hamilton Terrace, and left on Hall back to Barclays. 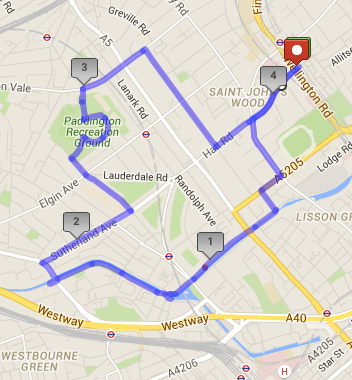