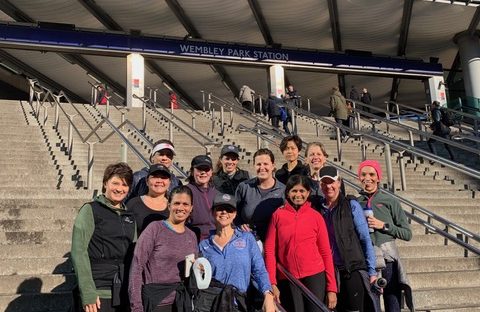 Hi everyone,
I hope you had a great break and are ready to get back down to business this week with some rested legs!

First, though, I do need to comment on how you guys rocked Wembley.  I am attaching my photo from that run – you guys are amazing.

We are so incredibly proud of all of you and how far you’ve come.  We have two more long runs to go and we know you can ALL do this.I saw Perla at Wellington Arch today as I was trying to get my own long run done – loved seeing her out on such a beautiful day in London!

A few things:
First, if you haven’t submitted information for the Milan photo directory, please do so ASAP.  Just click here for the fast and easy Google form!I’ll start chasing you down soon if you don’t submit…  Thank you to those who already have!
Right now, the weather in Milan is looking a bit warmer than what we have had in London, but not too warm.  So mid to upper-40s F/7-10 C is what is showing now for the race time starts about 2 weeks before the race, subject to change of course, and then warming up during the race.  You should be trying out what you think you might wear on the race over the next week or so.  Make sure nothing rubs the wrong way, think about layers, etc.  Some people will buy a cheap outer layer that they plan to toss when they get hot so they don’t have to carry it.  So think about whether you care if something is tied around your waist.  My beginner year, I bought that cheap layer but I realized during the race that I was so used to having something around my waist that I didn’t care, so I kept it.  Everyone is different, but think about what might work for you.

This week and for Kew, we will plan to take our gels while running.  We need to practice – we do not plan to stop to take the gels during the race.  Sometimes the gel packaging can be tricky – so just resort to pulling the tab off with your teeth if you have to.  This is why we practice 🙂  We will take the gels about 70-80 min into the run.

I know we are all excited to do the run to Canary and get us some margaritas.  I need to tell you, though, that Tortilla has suddenly realized that alcohol is not supposed to be served before 11 am (What?!?!).  So we may have a little pause before getting our drinks…
OK – for the run, don’t forget:

I have extra gels and will bring some with me this week for anyone who wants to try something new.
Canary Wharf route
Section One – Regents Park to the Canal
Run down Wellington Road to Prince Albert, cross using the zebra crossing and then head down to the mosque where you enter the park.  At the light, cross the Outer Circle and enter the park, keeping to the left and going over the wooden bridge.  Run straight and take a slight left (not a hard left) and run, crossing over one cross path and turning left at the second one.  Run back over the Outer Circle, cross the canal and then take a right to go down onto the canal.

Section Two – Canal to the Wall
Run along the canal for approximately 3 miles until the canal pathway ends at the famous “Wall.”  Note – there is likely a detour we will need to take:
DIVERSION – Follow the bridge across the canal and turn right on Camden High Street. Take the first left on Hawley Crescent and then left on Kentish Town Road. There is an entrance back to the canal path on the left side of the bridge.

Section Three – Angel Roads
We need to run through the Angel neighbourhood until we can re-enter the canal path.   At the wall follow the ramp up to Muriel Street.  Take a right and then an almost immediate left up a path that winds between the apartment buildings.  See the picture below for the entrance to the path.

Keep going straight on the path and it will become Maygood Street.  When you get to the intersection of a main road (Barnsbury Road) turn right.  Run until you make the second left onto Chapel Market.  (There is a metal archway saying Chapel Market and a zebra crossing at the intersection.)  Follow Chapel Market until the end.  (NB:  There is a public Ladies Room at the end of White Conduit Street, which intersects with Chapel Market about midway.)  Turn right at Liverpool Street to the major road Upper Street.  Cross Upper Street and turn left.  (NB:  Angel Tube Station is to your right if you are going home from here.)  Make your first right at Duncan Street and follow until the end.  The entrance to the canal path will be directly in front of you.  Go straight along the canal (NOT a sharp right turn.)

Section Five – Limehouse Basin to Canary Wharf
At the top of the brick steps, go straight.  At the Limehouse Gallery and Bronze Age shop turn right.  Run along the water until you reach the second metal foot-bridge leading to a park.  Cross the bridge and run through the park.  After the park, you’ll run straight, under an arch and the water will be on your right.  Run with the water on your right until you see the long flight of steps next to Royal China – see picture below.  You’re almost there!

Run up the steps and run one full time around the traffic circle.  Then run a half circle and continue on as if you had run straight ahead from the steps, through the small park to India Drive and then veer slightly right along Cabot Square.  You’re heading for the big skyscraper building in front of you.  Stop when you see the sign for the Canary Wharf DLR Station at the ‘mall’ entrance on the South Colonnade.  We’ll meet at the Tortilla inside the building, just right of the entrance. Yay!