November 1, 2016November 6, 2016
Hi everyone,
Sorry for the late email this week – it’s been a crazy week for some reason.
We have a jump up in time intervals this week but don’t be nervous – you can do it!  You are all doing so well.  If you are worried about the time, or feel tired during the run, just slow down.  We’re not in a hurry!  Do your best to do an extra run on the weekend – it will really help you continue to build your stamina.
Some of you have asked about eating before the run.  In general, it is good to have something in your stomach before you run, but not too much.  The key for all of you is to experiment.  A little later, as we are running for longer, I will send a long, information-packed email put together by WRW’s founder, Paula, on the science and theory behind what to eat before and after a run.  But I don’t think we need that level of detail yet.  For now, you should be trying different things to see what works for you because everyone is different.  Personally, I usually have a yogurt or a banana along with coffee and whole milk.  It’s enough to keep my stomach from grumbling and will give me a little energy, but won’t sit like a lump.  I know other runners like oatmeal or a smoothie or maybe half a bagel with cream cheese.  The important thing is to have something.  As we start to run longer, you will need a little more energy and it’s good to start trying things now.
Also, most of you will experience an increased appetite as a result of this training.  That is normal.  Many runners will say they didn’t lose a pound when they started running.  Usually it’s because you’re hungrier with increased activity levels, so you eat more.  Generally, women don’t lose or gain weight in training, but they have more energy, they can eat more and often digestive issues disappear.
Let us know if you have any questions about any of this!
Your Coaches
Route for this week:
Start down St John’s Wood Terrace to Charlbert and then down to the canal entrance at Regent’s Park.  Run east on the canal towards Camden Market where we exit the canal over the bridge and turn right onto Camden High Street.  We’ll run down Camden High Street to Mornington Crescent Tube Station and veer right onto Hampstead Road, which we will take down to Robert Street.  Turn right on Robert for a few blocks and then a left on Albany Street and then the first right onto Chester Gate.  Run on the Outer Circle of Regents Park until you get to the exit for Charlbert Street.  Take Charlbert back up to St John’s Wood Terrace and then to Starbucks. 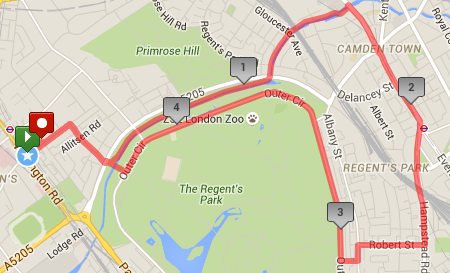