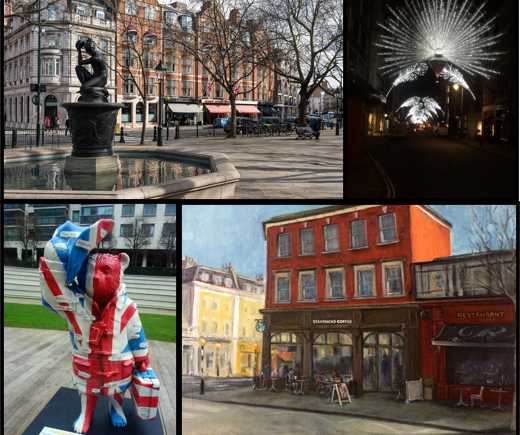 These are routes that loop back to SJW but don’t fall into any of the other categories in this section.

From Barclay’s head down Wellington Road to the traffic circle at Lord’s Cricket Ground and bear left onto Prince Albert Road. Run to the pedestrian crossing where we will cross and head to the Outer Circle. Turn right and run on the inside of the circle past Winfield House which will be on your left. Continue around the Outer Circle until you reach the traffic light at intersection with York Bridge. Turn left and proceed to the Inner Circle. Run one complete loop of the Inner Circle and back out across York Bridge where we will take a left and continue on Ulster Terrace which is part of the Outer Circle. At the next large intersection take a left and continue on the Outer Circle, heading north back towards the Zoo and Camden. Pass the entrance to the Zoo on your left and continue to the bridge at North Gate which we will cross to reach Charlbert Street. Run up Charlbert Street until St John’s Terrace where we turn left and run back to Barclay’s for a stretch before heading to Starbucks.

Sloane Square/Westminster/Green Park (7 miles)
Everybody starts out to Hyde Park, taking the usual route: west on Circus Road, left on Grove End, all the way down to Seymour Place where the road ends. Right on Seymour, across Edgware, left on Stanhope and enter the park. At the silver orb, turn left and run down to the southern edge, following the path to the right before it leaves the Park. Run to exit by the tall shiny new ‘One Hyde Park’ complex, cross over Knightsbridge and continue ahead on Sloane Street.  Continue past Sloane Square down Lower Sloane St/ Chelsea Bridge Road to the Thames. Turn left on the Thames side of Grosvenor Road and run along the embankment. Continue left on Birdcage Walk, cutting through St James Park to the Mall, then left on the Mall towards Buckingham Palace, crossing before the circle to reach Green Park. Run up to the Green Park Tube on Piccadilly St and head home!

Canal West/Paddington/Hyde/Green/Mayfair Loop (6.89 miles)
Start out by heading west on Circus Road, turn left on Grove End to St John’s Wood Road and go west, running along Blomfield towards the canal.  Do not get on the canal but instead cross over the canal and take the Westbourne Bridge over the Westway A40.  Run south on Westbourne Terrace and at the fork, bear right to enter Hyde Park at Lancaster Gate.

Run along the west side of the Italian Gardens and continue along the south side of The Serpentine until you reach Hyde Park Corner.  Run through Wellington Arch and turn left to enter Green Park.  Run to the Green Park Tube, cross Piccadilly and head north (turn left) on to  Berkeley Street.  After Berkeley Square Gardens, turn left and then right onto Davies Street.  Run north on Davies to the Bond Street Tube.  Go left on Oxford and then right onto James Street.  Run north on James which becomes Marylebone High Street.  At Marylebone Road, turn left and then right to enter Regents Park at York Gate.  Once in Regents Park, turn left and run along the Boating Lake back to the Charlbert Street exit.  Take Charlbert back to SJW Terrace and Starbucks.

We start out the same as our traditional Notting Hill Route: Circus Rd to Grove End, to St Johns Wood Rd to Cunningham, to Blomfield to the Canal, going west past the Westway to Ladbroke Grove. Once on Ladbroke Grove, run south all the way until it ends at Holland Park Avenue. Cross Holland Park Avenue, take a right and then a left on Holland Walk, just past Aubrey Road.  Holland Walk is a pedestrian way. Run up Holland Walk until the first entrance into Holland Park on your right, opposite the Duchess of Bedford Walk. Run into the park and then turn left on the Broad Walk which goes the length of Holland Park. Just before it ends at Kensington High Street take a left onto the quiet Phillimore Walk. Follow Phillimore Walk, which runs parallel to Kensington High Street, until you reach Hornton Street, where we take a right and then a left onto Kensington High Street. Continue on until you reach Kensington Gardens, where you enter it at the junction with the Broad Walk, just before Palace Gate Road. Take the Broad Walk to the first path on the right which turns into South Carriage Drive. You’ll run past The Albert Memorial and cross West Carriage Drive at the light. Continue on South Carriage Drive all the way to Apsley House/Hyde Park Corner. Cross over Piccadilly and run under Wellington Arch, then cross at the light to run along the path to the left of Constitution Hill, the same route we take in going to Big Ben. Cross the Mall, run along the edge of the park, and take the angled path to the Benugo cafe.  Do so some striders, have a stretch, and then indulge in some breakfast.  (Or, if you need to get back to SJW, instead turn left at the end of Green Park to run by Lancaster House and up to Green Park tube station.)

Battersea (10.3 miles)
This run is an up and back and you can pick your turnaround point to meet the distance in your training schedule.

We head out to Hyde Park, along the eastern edge of the park, and down Sloane Street to Sloane Square the usual way.  We continue through Sloane Square, down Chelsea Bridge Road, and over the Chelsea Bridge to the south bank of the Thames.  We will then turn right into Battersea Park and run along the south side of the Thames to the Albert Bridge, where we cross back over the Thames and then turn right again and run along the north side of the river back to Chelsea Bridge Road, where we will turn left and run back up through Sloane Square to Knightsbridge, turning right then left to retrace our way back into Hyde Park by the French Embassy.  Run to the paved path, turning right towards Hyde Park Corner, then left long the eastern edge of the park to the exit at Upper Brook Street [by the Animal War Memorial] and back to Starbucks the usual way.